Review: This Song Will Save Your Life by Leila Sales 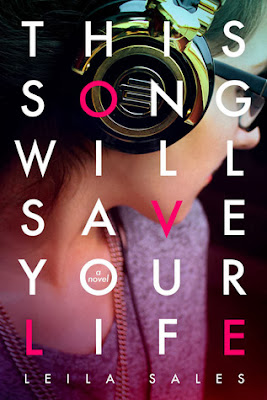 Making friends has never been Elise Dembowski’s strong suit. All throughout her life, she’s been the butt of every joke and the outsider in every conversation. When a final attempt at popularity fails, Elise nearly gives up. Then she stumbles upon a warehouse party where she meets Vicky, a girl in a band who accepts her; Char, a cute, yet mysterious disc jockey; Pippa, a carefree spirit from England; and most importantly, a love for DJing.

It's been a while since I got so wrapped up in a book. I loved the premise of this book from the start, mostly because I was intrigued by the main character developing a love of DJing, but also because I love a story about the invisible girl. There are so many directions a story like that could go, but Elise's might just be my favorite. I don't know anything about the world of underground parties and DJing and I can't really relate to Elise's school experience, but none of that mattered because I felt like I really got to know Elise and I desperately wanted her to find herself. Her journey wasn't the easiest and she made some pretty awful decisions, in my opinion, but her choices and rebellions were totally believable.

Elise was great, but so were the people that made up her world. She is a child of divorce and has three parents who don't really know anything about her, but still love her all the same. She's got a couple of younger siblings who were so wonderful, especially her precocious little sister, I loved the relationship between the two of them. Of course, my favorite of the side characters was Vicky, a girl she meets outside the warehouse party and who is instantly charmed by her. Their friendship, and just Vicky in general, was such a large and wonderful part of the story. I think everyone would be lucky enough to know someone like Vicky. I really can't say enough good things about this one. It's a phenomenal story about discovering who you are and who you want to be. So worth the loss of sleep!