"Take A Bow" by Elizabeth Eulberg 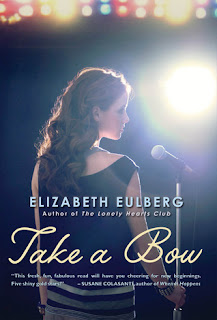 Emme, Sophie, Ethan, and Carter are seniors at a performing arts school, getting ready for their Senior Showcase recital, where the pressure is on to appeal to colleges, dance academies, and professionals in show business. For Sophie, a singer, it's been great to be friends with Emme, who composes songs for her, and to date Carter, soap opera heartthrob who gets plenty of press coverage. Emme and Ethan have been in a band together through all four years of school, but wonder if they could be more than just friends and bandmates. Carter has been acting since he was a baby, and isn't sure how to admit that he'd rather paint than perform. The Senior Showcase is going to make or break each of the four, in a funny, touching, spectacular finale that only Elizabeth Eulberg could perform.


I'm not always a fan of books that have so many point of views, but I love Elizabeth Eulberg's books, so I decided I had to give this one a shot. We first meet our four main characters as they are about to audition for their freshman year at CPA, they all have different reasons for wanting to be there, and none of them know what to expect. Then we jump right to the beginning of their senior years. They've all been in school together for three years and this year is when their futures will be decided. Emme and Sophie have been best friends since they were eight, but they are starting to drift apart. Emme has her band and her songwriting, and Sophie has Carter and the spotlight. Ethan and Emme have become really close since they became part of their band freshman year, but something happened over the summer and things are tense between them. Carter is a former child star who wants out of the spotlight, he just wants to be a normal guy.

Even though we alternate between these four characters, they are in each other's lives enough, that we get a pretty full picture of what is going on from day to day at CPA. My favorite character was Emme. She had the most going on in her story and she also had the most compassion. She was definitely naive, but had the biggest heart and worked so hard to keep things together. My next favorite is a tie between Carter and Ethan. I really liked getting to know Carter as a person, because he was learning about himself at the same time as I was, while reading. Deep down he's just a normal teenager who wants to be left to his own devices. I really enjoyed the friendship that formed between him and Emme, she really helped him see that getting what you want doesn't have to be so difficult. Ethan was so misguided and broken, through most of the book I either wanted to smack him or hug him. He was great with Emme, so careful with her feelings and taking care of her when something was wrong. He was so devoted to her and it was clear to anyone who was looking, except Emme. I hated Sophie. I know she's technically the villain of the story, so you aren't necessarily meant to like her, but I couldn't stand reading her chapters. If they hadn't been necessary to the flow of the story, I probably would have skipped them. She was manipulative, cruel and only cared about what everyone else could do for her.

This was an exceptional read. I loved how music tied into almost every part of the story and I am so enamored with most of the characters and the way they related to one another. As far as contemporaries go, this one should move up to the top of your wish list. If your reading experience is anything like mine,  you won't want to put it down until you are finished :0)