The Pants Project by Cat Clarke 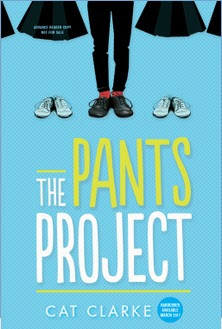 I'm Transgender. Which is a bit like being a transformer. Only not quite as cool as cool because I probably won't get to save the world one day."

A Transformer is a robot in disguise. Liv is a boy in disguise. It's that simple. Liv knows he was always meant to be a boy, but with his new school's terrible dress code, he can't even wear pants. Only skirts.

This was fantastic! Liv was charming, flawed, funny, confused, and so full of heart. I think it's really important for kids this age to have books about these types of topics, whether it's something they are going through themselves or not. In my opinion, this book in particular is great because Liv is such a relatable character. He truly is just a regular kid who gets in fights with his little brother, acts bratty toward his parents, and has to deal with immature classmates. Deep down he is just trying to figure out who he is and how to be that person, which I think is true for all of us at one point or another.

I adored all of the scenes with Liv's family and thought it was really great that we got to see how big of a role they played in his life, and how much they just wanted Liv to be happy. Whether you have two moms, two dads, or a mom and a dad, parents are parents and Liv's were really fantastic. They love their kids for exactly who they are and that's really the best any kid can ask for in their lives. And don't get me started on Liv's little brother, Enzo, that kid cracked me up.

I think my favorite thing in the book, though, was the friendship between Liv and Jacob. At first Jacob seems like your typical popular kid, but that is so far from the truth. Jacob didn't have time for mean kids or their games and he was just so good at letting it all roll off. Once we really get to know him, I don't think there was any point in the story that made me doubt how good of a person Jacob truly is.

This is definitely a worthwhile read. And I'm not going to lie, it made me cry a couple of times, but it was good crying :0)

*Book cover and synopsis from Goodreads