By Your Side by Kasie West 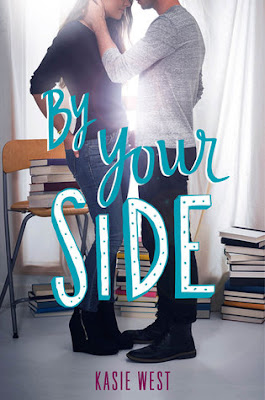 By Your Side by Kasie West
Publisher: Harper Teen
Release Date: January 31st, 2017
*Galley received from publisher for honest opinion*

When Autumn Collins finds herself accidentally locked in the library for an entire weekend, she doesn’t think things could get any worse. But that’s before she realizes that Dax Miller is locked in with her. Autumn doesn’t know much about Dax except that he’s trouble. Between the rumors about the fight he was in (and that brief stint in juvie that followed it) and his reputation as a loner, he’s not exactly the ideal person to be stuck with. Still, she just keeps reminding herself that it is only a matter of time before Jeff, her almost-boyfriend, realizes he left her in the library and comes to rescue her.

Only he doesn’t come. No one does.


Instead it becomes clear that Autumn is going to have to spend the next couple of days living off vending-machine food and making conversation with a boy who clearly wants nothing to do with her. Except there is more to Dax than meets the eye. As he and Autumn first grudgingly, and then not so grudgingly, open up to each other, Autumn is struck by their surprising connection. But can their feelings for each other survive once the weekend is over and Autumn’s old life, and old love interest, threaten to pull her from Dax’s side?

I don't know about everybody else, but being trapped in a library, for a long weekend, sounds like the a dream come true. I'm pretty sure I'd be perfectly fine all alone in that library, with all of those books, but if you want to throw in a cute and broody boy, I'm good with that, too! I'm fairly new to Kasie West books, but I've had fun reading the few that I have, and this one was another fun one.

I really liked that even though this was mostly a cute, fluffy read, it also had some real issues woven into the story. Autumn is a go-getter and a rule lover, but she also suffers from pretty serious anxiety. Being trapped anywhere isn't great for a person who suffers from anxiety, and it's made worse for Autumn because she only ran back into the library to use the restroom, so all of her stuff is in her friends trunk on the way to a party. Oh, and it's winter, so a big empty library is not exactly cozy.

Enter the mysterious Dax, who lives in a foster home and for reasons he isn't really up to sharing, was planning to stay in the library for the weekend. Autumn doesn't know much about Dax, but considering they only have each other for the time they are stuck in there, they do get to know one another a little and start to realize maybe surface judgements don't really mean anything.

I kind of thought, okay hoped, that the whole book would be them stuck in the library, but I'm glad we got to see Autumn and Dax outside of those walls. We got to see how their lives really were so different and it was no surprise they hadn't really known each other before, but it was also nice to see how their time trapped together played into their lives after.

This was cute, fun, and fluffy, but also had some substance and I had a great time reading it. My favorite Kasie West book is still P.S. I Like You, but this one is absolutely worth a read :0)

*Cover Photo and Synopsis from Goodreads*
Posted by Sarah (The Book Life) at 10:00 AM