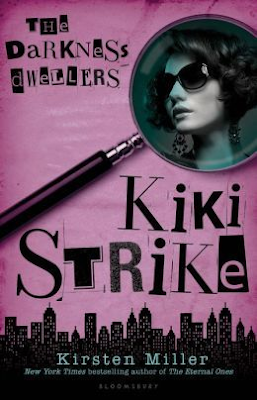 Release Date: January 22nd
Publisher: Bloomsbury
First they ventured deep under New York to save the city itself. Then things got personal as the Irregulars ventured into a haunted mansion in Chinatown to uncover an evil twin. Now, in the third installment of bestselling author Kirsten Miller's Kiki Strike series, this delightful group of delinquent geniuses jump feet first into a fast-paced international pursuit, going underground in Paris to pursue a pair of treacherous royals who have killed Kiki's parents. With a dash of romance, a fresh take on good manners, and loads of butt-kicking bravery, Kiki, Betty, Ananka and the other Irregulars sharpen their amazing skills in this highly anticipated new adventure.
I am such a fan of the Irregulars. I first started reading about Ananka Fishbein years ago, before I ever dreamed of having a blog to write about what I thought of her adventures. I don't think anything can compare to the magic of reading about the Shadow City, but this one is definitely up there right along with it. There is so much going on in The Darkness Dwellers and Kirsten Miller does an excellent job of weaving it all together.
This series is the epitome of smart girls kicking butt and getting things done. I love the adventure and mysteries that are written all through the series and I especially liked that we get to see some resolution for Kiki in this book. It's been a long time coming, and it certainly doesn't come easy for her, but she's finally able to prove who killed her parents.
I definitely recommend this series to anyone looking for really fun adventure with a handful of sassy female characters. Join Ananka, Kiki and the Irregulars in the Shadow City and stick with them until Kiki gets to claim her place in Pokrovia. I don't think you'll be disappointed.
Completely unrelated to plot or story, I really loved the original covers for this series, I feel a little underwhelmed by the new redesign that was done for the release of book three. Of course, what's on the outside doesn't change all of the awesome things on those pages :0)
Goodreads l Barnes & Noble l Amazon