#GeekGrlzRevenge Blog Tour - BLAZE (or Love in the Time of Supervillains) Review :0) 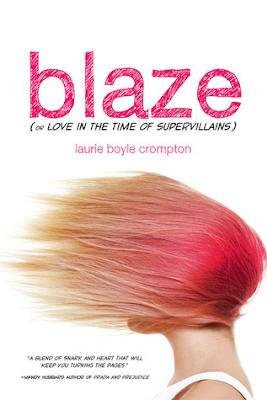 Release Date: February 1st, 2013
Publisher: Sourcebooks Fire
Blaze is tired of spending her life on the sidelines, drawing comics and feeling invisible. She's desperate for soccer star Mark to notice her. And when her BFF texts Mark a photo of Blaze in sexy lingerie, it definitely gets his attention. After a hot date in the back of her minivan, Blaze is flying high, but suddenly Mark's feelings seem to have been blasted by a freeze-ray gun, and he dumps her. Blaze gets her revenge by posting a comic strip featuring uber-villain Mark the Shark. Mark then retaliates by posting her "sext" photo, and, overnight, Blaze goes from Super Virgin Girl to Super Slut. That life on the sidelines is looking pretty good right about now...

© 2012 Anne Cain
Website: http://annecain-art.com/
Blaze is the type of teenager I always imagined I was, when I think back to those years. She is sarcastic and at the same time she has her insecurities. I guess that's pretty similar to a lot of teenagers, at least the insecurity part. I wasn't obsessed with comics like Blaze, but considering the father she had and the fact that he actually named her Blaze (it's not a nickname, folks), it's not really a surprise. I knew I was going to love this book when in the first chapter we learn that Blaze is basically a soccer mom. She has the van, she carts her younger brother and his team to games, and she sits on the sidelines all season long. She's got the bumper sticker, too, but that's just because she's ironically cool.
Blaze's crush, turned archnemesis, Mark wasn't really all that for me. I totally get how she could have a crush on him. He's the hot popular jock and he coaches kids in soccer, but he wasn't really all that for me. It was definitely more fun when he reached archnemesis status.
Blaze also dabbles in comics and has created one that's kind of an alternate reality for herself, called the Blazing Goddess. I'm totally jealous of this. When I was a teenager I always wanted to be a super artistic and creative type, but I never really found my niche. It definitely made Blaze's character more relatable for me. Seriously, guys, this book is so awesome and funny. You definitely want to pick it up and give it a go. Anne Cain's art was such a cool addition to the story and really brought it all together. I can't wait to see what Laurie Boyle Crompton has in store for us next :0)
Posted by Sarah (The Book Life) at 8:46 PM