Meant to Be by Lauren Morrill 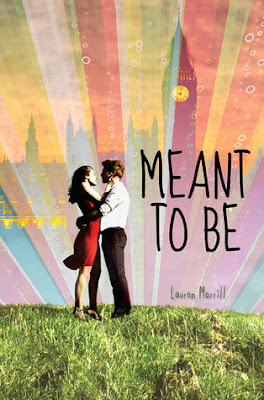 Release Date: November 13th, 2012
Publisher: Delacorte
Format: eARC
Genre: Contemporary Romance
Meant to be or not meant to be . . . that is the question.

It's one thing to fall head over heels into a puddle of hazelnut coffee, and quite another to fall for the—gasp—wrong guy. Straight-A junior Julia may be accident prone, but she's queen of following rules and being prepared. That's why she keeps a pencil sharpener in her purse and a pocket Shakespeare in her, well, pocket. And that's also why she's chosen Mark Bixford, her childhood crush, as her MTB ("meant to be").

But this spring break, Julia's rules are about to get defenestrated (SAT word: to be thrown from a window) when she's partnered with her personal nemesis, class-clown Jason, on a school trip to London. After one wild party, Julia starts receiving romantic texts . . . from an unknown number! Jason promises to help discover the identity of her mysterious new suitor if she agrees to break a few rules along the way. And thus begins a wild goose chase through London, leading Julia closer and closer to the biggest surprise of all: true love.

Because sometimes the things you least expect are the most meant to be.
This book is so much fun! Julia is obsessed with finding her MTB and is pretty much willing to go to any lengths possible to be with that person. Julia is a part of a school trip to London for spring break and ends up going against her normal behavior by attending a party. This is where the fun really begins. All the chapters are titled with text messages between Julia and the mystery person texting her, between Julia and her best friend, and from a popular girl in class who doesn't really like her all that much. I thought this was a really fun way to get into the story and it was cool to try and guess what the more cryptic texts were really hinting at.
I liked Julia as a main character. I thought her straight-laced attitude and constant need to follow the rules was particularly amusing, especially when she would slip up and break a rule. Most of these instances happened when she was with Jason, whom I absolutely adore. He was so funny and constantly giving Julia a hard time. He was also, so obviously, into her. Of course, she was oblivious, which made it all the more fun for me as a reader. I also really liked the foreign setting. I love a stories ability to take you into a new worl, and I especially like it when that new world happens to also be in another country. You get to be a bit of a tourist, without ever getting up from your chair.
This was a fun, light, and hilarious romantic story. Yes, it was definitely predictable and I wasn't ever really surprised, but that didn't keep me from thoroughly enjoying it. If you are looking for an awesome contemp, I definitely recommend picking this one up when it comes out. Lauren Morrill has given us an excellent story to add to our shelves :0)