Girl Out of Water by Laura Silverman 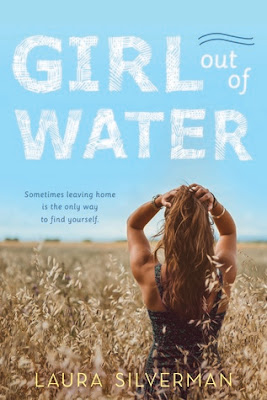 *I received an e-copy via Netgalley for an honest opinion

Anise Sawyer plans to spend every minute of summer with her friends: surfing, chowing down on fish tacos drizzled with wasabi balsamic vinegar, and throwing bonfires that blaze until dawn. But when a serious car wreck leaves her aunt, a single mother of three, with two broken legs, it forces Anise to say goodbye for the first time to Santa Cruz, the waves, her friends, and even a kindling romance, and fly with her dad to Nebraska for the entire summer. Living in Nebraska isn’t easy. Anise spends her days caring for her three younger cousins in the childhood home of her runaway mom, a wild figure who’s been flickering in and out of her life since birth, appearing for weeks at a time and then disappearing again for months, or even years, without a word.

Complicating matters is Lincoln, a one-armed, charismatic skater who pushes Anise to trade her surfboard for a skateboard. As Anise draws closer to Lincoln and takes on the full burden and joy of her cousins, she loses touch with her friends back home – leading her to one terrifying question: will she turn out just like her mom and spend her life leaving behind the ones she loves

I loved that this book was, at it's heart, about family and what it means. Anise could be completely bratty and self-centered at times, but when it really came down to it she was there for her family. She came to learn that everything isn't just about her, but that there are other people whose feelings and needs matter. Since she has always lived in the same place, I think it was really great to see her plopped in the middle of somewhere completely foreign to her and watch her figure out a little more about herself and about life. I also really appreciated the fact that her mom never showed up in the book. I think that would have been too cliché and unrealistic, but even though she never came, I like that we got to see Anise sort out her relationship with her mother and come to terms with it in some ways. I loved the attention shown to the importance of friendships and being there for people, even when it's not the easiest choice to make. There were definitely times that Anise didn't always make the right choice, at least initially, but she did a lot of growing up during this story and it was an awesome thing to read.

The romance in this was absolutely adorable and Lincoln is one of the best characters I have read in a contemporary YA novel. I loved his attitude and the way he took on life despite the curve balls it has thrown him along the way. He is just an all around nice guy, but not in that boring way nice guys can sometimes be portrayed in books and movies. He is funny and spontaneous and here to take on life. Anise definitely grew from the short time she knew him in this novel, and I feel like she will grow to become an even better person for having him in her life.

Contemporaries are a favorite of mine, but even so, I can still get pretty critical. Especially when stories just start sounding like different shades of the same basic premise. That was not a problem with Girl Out of Water. It felt new and exciting, and I had so much fun reading it. Definitely recommend!


*Cover image and synopsis from Goodreads
Posted by Sarah (The Book Life) at 11:17 PM