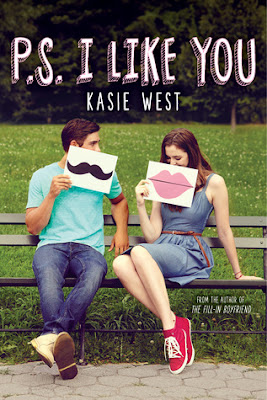 What if the person you were falling for was a total mystery?

While Lily is spacing out in Chemistry one day, she picks up her pencil and scribbles a line from one of her favorite songs on the desk. The next day, someone else has written back to her on the desk! Soon enough Lily and the mystery student are exchanging notes, and lyrics, and even sharing secrets. When Lily finds out that her anonymous pen pal is a guy, she's flustered -- and kind of feels like she's falling for him. She and her best friend set out to unravel the identity of the letter writer -- but when the truth is revealed, the guy is the LAST person Lily could have ever imagined it to be. Now that Lily knows the truth, can she untangle her feelings and gather the courage to listen to her heart?

I absolutely love the idea of a mystery pen pal romance. So I decided to make P.S. I Like You my first Kasie West book. And I was not disappointed. This book was overflowing with cute and had so much wonderful snark. Our main gal Lily liked to stay under the radar. She loves good music, playing guitar, and dreams of being a successful songwriter. Of course, she's got to actually finish a song first.

She jots down a line to her favorite song on her desk in chemistry and the next day, whoever sits at her desk in a different chem class, wrote the next lyric to the song in response. Thus begins the pen pal relationship that is central to our story. Lily and her mystery pen pal find it easy to confide in each other and they start to grow closer without knowing who either of them are.

It was fun reading their back in forth, especially because it was pretty obvious early on who the mystery pen pal was, but even though I had it guessed it didn't ruin the story. I think it actually made it better, because I was so curious how it was all going to come out and how they were going to handle it when they found out the truth.

This book was chock full of good banter, awesome friendships, and crazy family that come through in the end. I will definitely be picking up other Kasie West novels, because I am hoping for more adorable and solid contemporaries just like this one!

*Advanced copy provided by the publisher for honest feedback*

*Cover and blurb from Goodreads