More Happy Than Not by Adam Silvera 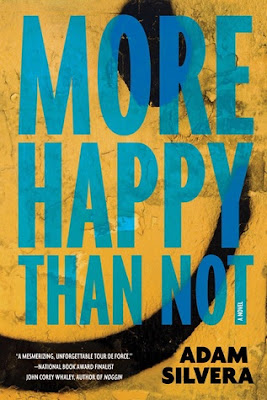 In the months after his father's suicide, it's been tough for 16-year-old Aaron Soto to find happiness again--but he's still gunning for it. With the support of his girlfriend Genevieve and his overworked mom, he's slowly remembering what that might feel like. But grief and the smile-shaped scar on his wrist prevent him from forgetting completely.

When Genevieve leaves for a couple of weeks, Aaron spends all his time hanging out with this new guy, Thomas. Aaron's crew notices, and they're not exactly thrilled. But Aaron can't deny the happiness Thomas brings or how Thomas makes him feel safe from himself, despite the tensions their friendship is stirring with his girlfriend and friends. Since Aaron can't stay away from Thomas or turn off his newfound feelings for him, he considers turning to the Leteo Institute's revolutionary memory-alteration procedure to straighten himself out, even if it means forgetting who he truly is.

Why does happiness have to be so hard?

Aaron is just a regular kid who hangs out with his friends from the neighborhood, spends time at the comic book store, and hangs out with his girlfriend. Of course, Aaron has been through some pretty intense stuff in his relatively short life and somedays are harder than others. His best friend acts weird around him lately and he's starting to question whether his girlfriend is really the one he wants to be with. Once Thomas comes into Aaron's life, his discontent seems to lessen, things start to feel like they are falling into place for him, and he just genuinely seems happier. I just really wanted Aaron to come out on top.

So when things with Thomas take a turn, I was really bummed that Aaron wanted to turn to the Leteo Institute. Sometimes life sucks and you just really wish you could forget all of the pain, but that's also the stuff that makes us who we are. I guess I understand to some extent, especially because there were so many people that behaved so horribly in reaction to the things going on with Aaron, but the people who truly mattered loved him anyway and that's why I had a hard time agreeing with the decision Aaron was making.

This book had me all over the place trying to decide what was really going on. And I never could have guessed how it would actually end. It definitely got me teared up on a couple of occasions and in the end just left me wanting to give Aaron a hug.

I thought this was a great story and even though I'm a little behind on reading it, I'm glad I finally did. I'm really looking forward to what Adam Silvera has to offer next.

*Cover photo and blurb from Goodreads
Posted by Sarah (The Book Life) at 11:00 AM