"When You Were Mine" by Rebecca Serle 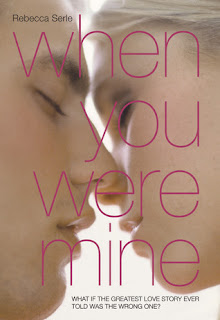 What’s in a name, Shakespeare? I’ll tell you: Everything. Rosaline knows that she and Rob are destined to be together. Rose has been waiting for years for Rob to kiss her—and when he finally does, it’s perfect. But then Juliet moves back to town. Juliet, who used to be Rose’s best friend. Juliet, who now inexplicably hates her. Juliet, who is gorgeous, vindictive, and a little bit crazy...and who has set her sights on Rob. He doesn’t even stand a chance. Rose is devastated over losing Rob to Juliet. This is not how the story was supposed to go. And when rumors start swirling about Juliet’s instability, her neediness, and her threats of suicide, Rose starts to fear not only for Rob’s heart, but also for his life. Because Shakespeare may have gotten the story wrong, but we all still know how it ends….﻿


I'm one of the rare few who doesn't actually like the original Romeo & Juliet. I've always found it extremely depressing, unromantic, and wildly inappropriate. That being said, I love Romeo & Juliet retellings. So when I heard about this book I immediatly put it on my wishlist. When You Were Mine is less of a retelling, though, and more of a reimagining from a different point of view.

I'd never given much thought to the character of Rosaline in the original story. She's a very minor character and we only hear about her briefly, so I was really interested in her story and how it tied in with the tragedy of Romeo (Rob) & Juliet. I loved Rose, she had such a great voice and all kinds of attitude, while being sweet and shy at times. Rose has got feelings for her best friend and the boy next door, Rob. And she's pretty sure he feels the same way, because before he left for the summer there were moments. Of course, now that the summer is over and he is back in town, she is really nervous about seeing him. What if he doesn't feel the same way? What if his feelings changed over the summer?

She didn't need to worry, though, and things seems to be going great for her and Rob. Well, except for one small problem. Her cousin Juliet. Honestly, I liked Rose better after she and Rob weren't in each others lives. She always had her best friends , but she starts branching out a little more in school and becomes a little more Rose. While this story isn't really anything like Romeo & Juliet, they are in the story, and we all know their lives end in tragedy. It's sad and it's hard watching Rose deal with the guilt she has over it, but it also serves as a final step for Rose to move on with her life and be the girl she is now.

This was excellently told and so clever. It's about time someone wrote about other characters from this world.  I didn't even know I wanted to read Rosaline's story until I found out she was getting one. Definitely recommended :0)
Posted by Sarah (The Book Life) at 9:52 AM