Meeting Trish Doller & the Something Like Normal Release Party + Giveaway! 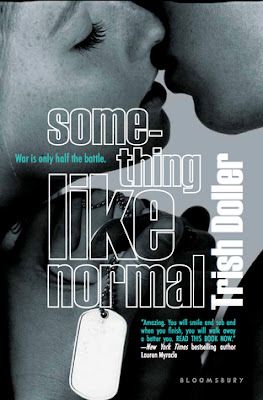 On Satuday my friends Shanon, Olivia, and I road tripped to Ft. Myers for the release party of Trish Doller's phenomonal book, Something Like Normal. We met up with Jenna and Nanci, and got some food before heading over the Barnes & Noble where the party was being held. Courtesy of of Tropical Storm Debby, we got pretty wet going to and from the car, but it just added to the road trip adventure.

The Barnes & Noble that Trish had her party at is also where she works, and it is a great store. It's so big and there was so much to look at. I think we probably circled the store a few times just checking everything out :0)

We got there early, but once they had the chairs set up and Trish arrived we all got to sit and chat for a bit before the party officially started. Trish is so cool and it was a blast just hanging out and talking with her. They had a table set up for her to sit behind, but she decided she'd rather sit on the table, which made everything feel so much less formal and just a fun experience.

Trish told us about her first book that was supposed to be published in 2010, but because of some changes at the publisher, it never came to be. She said she thinks it was supposed to happen that way, though, because she's not sure Something Like Normal would have become what it is if the other one came out first. That's such an awesome attitude and I'm so glad Something Like Normal exists, so I think I'll agree with her :0)
She also told us a lot about a Marine that helped her throughout her writing process. She said she couldn't have finished the book without him and I think it's really cool how close of friends they've become. She also revealed what Harper's tattoo is and it is really cool! We also got a small snippet from the project she is currently working on and I'm sure it's going to be an awesome story. It's not a book yet, though, so we'll have to wait for that one.

She read some awesome excerpts from the book, and talked about Charlie and how she really wanted to make sure he was a character in the story, even though he is dead. If you haven't read it, Charlie had so much personality and definitely brings a lot to Travis' story. Then it was time to get our books signed! And of course take pictures!

This was definitely my favorite of all of the author events I've been to and I am so glad that we made the trip! There is no doubt that I will be at the one for her next book and any of the ones after. Trish is so cool and if you get the chance to attend one of her events, or if you are stalking her and "run into" her in public, definitely make it a point to meet her :0)

And! I picked up an extra signed copy for one lucky person! All you have to do is fill out the Rafflecopter below and keep your fingers crossed, because you WANT this book :0)


a Rafflecopter giveaway
Posted by Sarah (The Book Life) at 4:31 PM