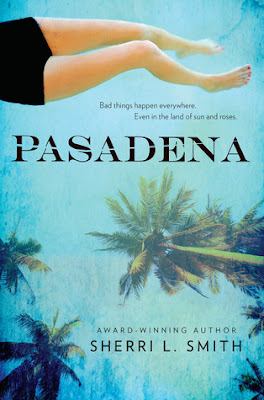 Bad things happen everywhere. Even in the land of sun and roses.

When Jude's best friend is found dead in a swimming pool, her family calls it an accident. Her friends call it suicide. But Jude calls it what it is: murder. And someone has to pay.

Now everyone is a suspect--family and friends alike. And Jude is digging up the past like bones from a shallow grave. Anything to get closer to the truth. But that's the thing about secrets. Once they start turning up, nothing is sacred. And Jude's got a few skeletons of her own.

I'm not really sure what to think about this one. I finished it, in one sitting, so I didn't hate it. It was actually a really quick read and I think it was well written, but I didn't have any "Whoa!"  moments while reading it. I guess it was just a quiet kind of story. I will say that I was a bit surprised by the end, which is definitely good in a mystery novel.

The main character wasn't particularly likable, but I think that was kind of the point. It was more about how the best friend kept their group of friends together. They were just a bunch of teenagers who didn't really have anything in common, except Maggie, and once she was out of the picture all of the reasons they weren't really friends becomes obvious. Jude is certain that Maggie didn't kill herself, she is convinced she was murdered, and now that she realizes how little she knows about her other friends she is very suspicious of all of them.

Sometimes while I was reading I had to remind myself that these were high school students that I was reading about. So many of them acted more like adults. There was the main, over-arcing mystery about Maggie's death, but there was also a secondary "mystery" surrounding Jude. Right from the start you get a pretty good idea of what the secret she is hiding is, but it all stays pretty vague through the whole book. And once she finally revealed the full truth about it, it was slightly anti-climactic. I guess that is the theme for me with this book. It was all just very anti-climactic. I didn't love it, but I also didn't hate it. It was well written and I breezed through it, but all in all I don't feel like it was all that memorable.

If you are in the mood for a quiet mystery that flies under the radar, this one just might be for you.

*Cover photo and synopsis from Goodreads*