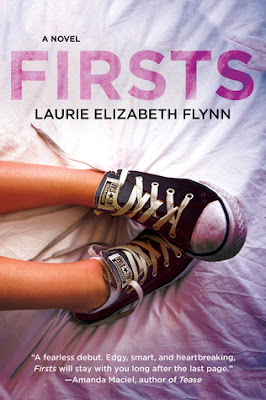 Seventeen-year-old Mercedes Ayres has an open-door policy when it comes to her bedroom, but only if the guy fulfills a specific criteria: he has to be a virgin. Mercedes lets the boys get their awkward, fumbling first times over with, and all she asks in return is that they give their girlfriends the perfect first time- the kind Mercedes never had herself.

Keeping what goes on in her bedroom a secret has been easy- so far. Her absentee mother isn’t home nearly enough to know about Mercedes’ extracurricular activities, and her uber-religious best friend, Angela, won’t even say the word “sex” until she gets married. But Mercedes doesn’t bank on Angela’s boyfriend finding out about her services and wanting a turn- or on Zach, who likes her for who she is instead of what she can do in bed.

When Mercedes’ perfect system falls apart, she has to find a way to salvage her reputation and figure out where her heart really belongs in the process.

It is evident pretty quickly into the book that Mercy is lost. She doesn't really know who she is or who she wants to be, but she thinks she's in control and she does some pretty extreme things to keep a handle on her "control". I felt sad for Mercy a lot throughout this story, because she went about so many things in all the wrong ways and didn't trust people enough to let them get close and be there for her. Obviously, as an outside observer, you knew everything was going to go wrong eventually, but that was really the only way it could ever go.

There was a lot I liked about this book. I was definitely a fan of the message about double standards and learning to appreciate the people in your life who want to be there. I was a little bothered by Mercy at points in the book. The way she treated herself and other people just got under my skin. Which I guess was probably the point, at least to some extent, but in the end I felt like she could have done more to earn things back. I won't say more, because I don't want to spoil things.

All in all, I enjoyed Mercy's story and I think it says a lot of good things.

*Cover photo and description from Goodreads
Posted by Sarah (The Book Life) at 8:08 PM