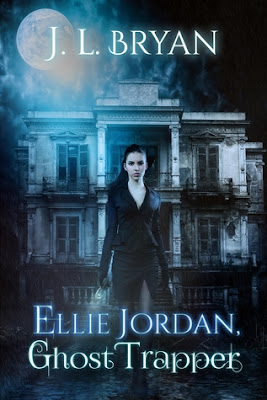 Ellie Jordan’s job is to catch and remove unwanted ghosts. Part detective, part paranormal exterminator, Ellie operates out of Savannah, Georgia, one of the oldest and most haunted cities in North America.

When a family contacts her to deal with a disturbing presence in the old mansion they’ve recently purchased, Ellie first believes it to be a typical, by-the-book specter, a residual haunting by a restless spirit. Instead, she finds herself confronting an evil older and more powerful than she’d ever expected, rooted in the house’s long and sordid history of luxury, sin, and murder. The dangerous entity seems particularly interested in her clients’ ten-year-old daughter.

Soon her own life is in danger, and Ellie must find a way to exorcise the darkness of the house before it can kill her, her clients, or their frightened young child.

This was a completely random read. I had never heard of this series and honestly don't know if I ever would have, but someone has posted about the most recent book on Instagram and it caught my eye. I looked up book one and decided it sounded like something I might enjoy, so I gave it a go.

This was an incredibly fast read. You meet Ellie and pretty quickly get whisked into her world of ghost trapping. This revolves around one particular haunting and the mysteries behind it. I don't know if each book in this series focuses on just one case, but it definitely worked for this story. We don't get too in depth into Ellie's life, since most of the story revolves around the case at hand, but what we do get to know about her I liked. I was interested in knowing what she knows about the supernatural and I really enjoyed watching the dynamic between her and the new people she suddenly finds on her team.

The ghost story in this was super creepy and definitely held my attention. I actually read this book in one evening. It moved along at such a fast pace it wasn't hard to sail right through, and I was so darn curious about what was really happening their clients house that I had to keep turning pages. The mystery behind the haunting was actually pretty complex and I feel like it definitely paid off by the end. I've never personally seen a ghost, but I have had a couple of eerie encounters where I have heard voices talking to me when no one was there, so I have at least a little faith in some of this stuff being real. I don't know if there are really ghost hunters out there who do things at the scale in which Ellie and her crew do, but I think it would be really interesting to spend time with the gadgets that they use in the book. Of course, I was totally creeped out just reading about it, so maybe coming face to face wouldn't be such a great plan.

I'm definitely curious to know more about Ellie and Stacey, and I look forward to going on more ghost hunting adventures with them. This book felt like watching an episode of Supernatural, but creepier because it was all from my own imagination. I'll be interesting to see what types of hauntings come up next and I'll definitely be keeping my lights on while reading!

*Book cover and description provided by Goodreads
Posted by Sarah (The Book Life) at 10:24 AM