Losing It by Cora Carmack 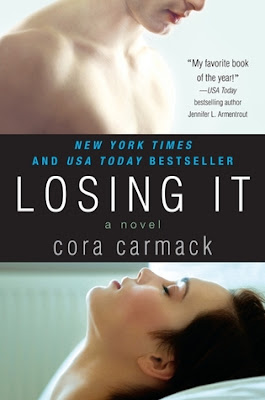 Bliss Edwards is about to graduate from college and still has hers. Sick of being the only virgin among her friends, she decides the best way to deal with the problem is to lose it as quickly and simply as possible-- a one-night stand. But her plan turns out to be anything but simple when she freaks out and leaves a gorgeous guy alone and naked in her bed with an excuse that no one with half-a-brain would ever believe. And as if that weren’t embarrassing enough, when she arrives for her first class of her last college semester, she recognizes her new theatre professor. She’d left him naked in her bed about 8 hours earlier.
Oh how I love this book! Bliss Edwards is all kinds of awkward and I love her oh so much for it. The premise on this one is just perfect for all kinds of awkward moments and humor, and Cora Carmack definitely delivers on both fronts.
I loved Bliss and Garrick's initial meeting at the bar. She straight up called him out on his chosen reading material and from that moment on I knew her and I could be friends. Garrick realized how special she was too, and so begins Bliss's journey to devirginization. It gets a little steamy and we get some awesome inner dialogue, and then we get the freak out. Personally, I thought her excuse for bailing was hilarious. I know some people thought it was kind of cheesy, but how can you not laugh at this:
"Stop! Cats! Stop..."
(Okay, I'll admit that probably makes more sense when you read it with the whole scene surrounding it, but I don't want to spoil the greatness that is that scene!)
Of course, it isn't until she walks into class the next day and Garrick turns out to be her teacher. That's when things get real. While I'm not a fan of stories that have a student/teacher relationship, that mostly applies to high school. I figure all people in college are adults, so therefore, who cares. And this student/teacher relationship was particularly swoony. I don't think it hurt that Garrick has a British accent, because any guy who calls you love with a British accent is automatically swoon worthy. Trust. (Sidebar: I have personal experience with this. This particular young man wasn't your typical male lead from a book, but as soon as he started speaking with his beautiful accent I was done for. By the time he called me love, I was ready to forget that he was wearing a creepy trench coat and buying graphic novels...just saying.) So Garrick had a lot of points in his favor with me from the beginning, but as I got further into the story it became very obvious that he deserved all the love I was giving him. He was such a sweet and patient guy, plus he was good with cats.
Garrick isn't the only guy in Bliss' life, though. Cade, her best friend and the boy who secretly loves her, was so freaking adorable. I'm a huge fan of stories with best guy friends, and usually I love best friends falling in love, but as much as I loved Cade in this story I never really saw him with Bliss. I am, however, overjoyed that he is getting his own story.
Overall, this book was full of humor, friendship, love and awkwardness. I wholeheartedly recommend it and if we're ever at a bookstore together, I will pester you until you buy it. It's good, ya'll, and you won't be sorry you picked it up :0)