Today we've got author, Dina James on the blog talking to us about crossover appeal for the blog tour of her new book, Time Heals!

Thank you, The Book Life, for having me on your blog!


When I was first asked to consider writing a paranormal story for young adults, I was horrified. Me? Did the person who asked even READ my stuff? Blood! Guts! Gore! Uh…”friendly” encounters! Not exactly stuff parents would approve of for their small humans.


What did "young adult" really mean, anyway? I had no idea. Other terms like "middle grade" and "advanced reader" were tossed around too. What did it all mean?


After some research into what the genre really requires, I understood better.


All "young adult" (YA) means as a genre is the main character is under eighteen.


That's it. Nothing about book length, subject matter, plot, language used. There was nothing that said anything about…well…anything.


And there was nothing that said a book with an intended younger audience couldn't appeal to another. Movies do it all the time. Movies I watched as a child – that were aimed at my then-age group – I watch in complete horrified fascination now, as I get all the in-jokes and other things that totally went over my head as a child. Movie writers deliberately put those in so the parent having to watch the film with the intended audience member will have something to enjoy, also.


Well, that sounded all right. I thought about it (all right, I agonized) and, after much discussion with friends and family, agreed to try it. I wrote a short story with the specific intention to prove that I couldn’t write for a younger audience.


I deliberately went the complete opposite direction of what was expected of me. I didn’t write about a girl turning into a vampire or finding out her boyfriend has joined a vampire clan or learning she’s a vampire hunter.


I wrote about a girl who learned she was a vampire healer.


Seriously, all these vampire hunters and slayers about and not one person takes pity on these poor fanged fellows? How awful! Not all slayers and hunters are competent, you know!


Sometimes they miss and only wing the intended target. That has to hurt! So where does a hurt vampire go for help if they need it? That’s the question I set out to answer.


My evil plan to prove I couldn’t write for young adults backfired, and today we have the Stranger Things series. The main character, Rebecca, doesn't just heal vampires, she heals Ethereals in general. If it's supernatural or thought to be imaginary, chances are it will be coming to her for help at some point.


The medical aspect may not be the most interesting thing to a younger reader, but might be to that reader's parent who is a nurse or a paramedic.


The supernatural aspect may very well appeal to any reader, regardless of age, who enjoys reading about vampires and werewolves.


The intended audience may identify more with the relationships of the main character than they do with what goes on around her.


I didn't specifically include anything that would appeal to adult readers like the movies of my childhood did. Honestly, the audience isn't something I kept in mind very much while writing, because to me, readers are readers, regardless of age.


I didn't write this book – this series, if you want to get technical – with any particular audience in mind.


To be honest, I couldn't even write it until I put the idea of the intended audience out of my head. Once I did that, I just wrote the story I had in mind. Oh, there are a few considerations I had to take once it was written – I mean, there's a reason movies are rated PG-13, NC-17, R, and so on.


That's really all I had to keep in mind. PG-13. NC-17 at the very worst. There were a couple things I deleted or altered because they strayed too close to R territory, but for the most part it wasn't something I even thought about.


Readers are readers, no matter what. I was reading Jean Auel when I was twelve.


And I still read the Babysitter's Club.
Time Heals by Dina James: 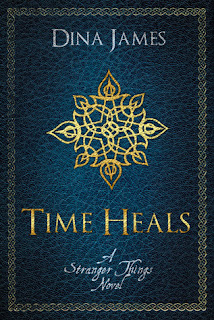 Rebecca MacDonnell is strange. More than that, she's a Stranger, a human born with the ability to use her own life's force to heal ethereal beings. Vampires, werewolves, demons, ghosts, goblins, and other things thought only imaginary all need help sometime, and when they do, they come to her.

Some things, however, are beyond help. Something is stalking all Ethereals, great and small. Beings of every race are fleeing a terror no one will acknowledge, let alone name.

At seventeen, Mistress Healer Rebecca is still learning to manage her power. She must learn to control it before it controls her.

Unless it's already too late.

When her burgeoning ability gets away from her, that which heals turns to harm and drives her loyal man-wolf bodyguard Billy straight into the arms of the unknown horror.

Unlikely new friends are her only hope to finding out what's happened, and she must enter new – and dangerous – territory in order to do it.
And don't forget to check out book 1, All Wounds: 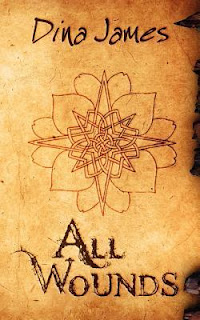 It's said that when opportunity knocks on your door, you have only one chance to take it.No one said what you're supposed to do when it kicks it.All Rebecca MacDonnell wants to do is get through high school with grades good enough to win a prestigious scholarship so that she can finally leave her miserable life behind. One evening, after a particularly bad day, she finds out that people other than her aging grandmother need her help, and desperately so.Well, not "people," exactly. Vampires, werewolves, demons, ghosts, goblins, and other things thought only imaginary all need help sometime, and Rebecca was born with the unique ability to heal ethereal beings. She is about to turn seventeen, the age at which her talent will manifest in its entirety, and become a true Healer...if she lives through the event. A war between various ethereal factions is brewing, and Healers are a valuable commodity to any side. Those who wish to harness Rebecca's manifesting healing powers for their own purposes must get to her before her seventeenth birthday.Only two vampires and a rogue werewolf stand between Rebecca and those determined to make her serve them, and the fact that Rebecca has no clue what she's doing doesn't exactly help matters.Neither does being seriously attracted to more than one of those just trying to protect her.For a soon-to-be seventeen-year-old Healer-in-training, that's a lot to handle.Especially on top of her homework.
Thanks for stopping by, Dina!